10 Things That Are Way Funnier Thanks to Adam Sandler 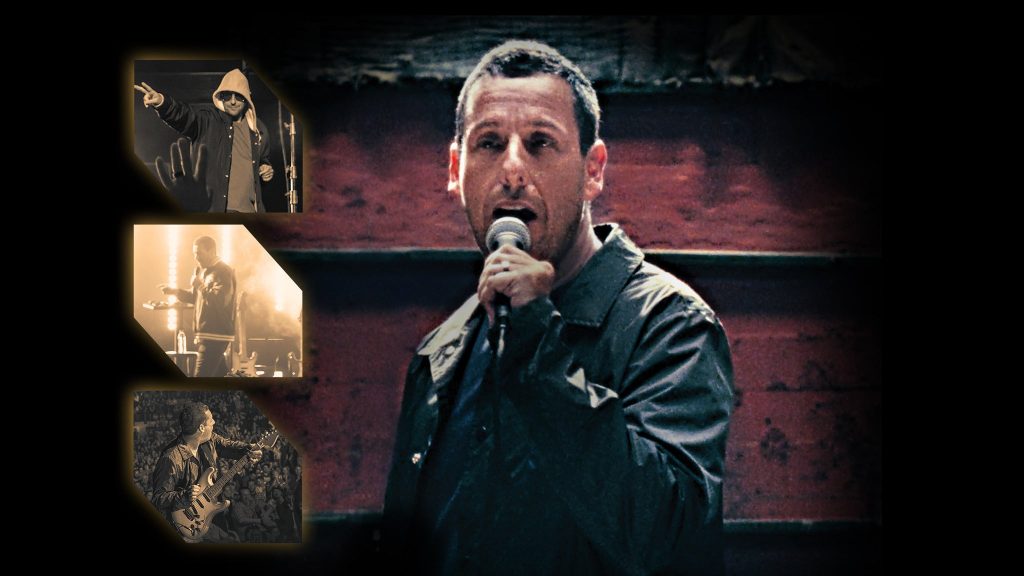 There are many reasons it’s been so great having Adam Sandler back on stage doing stand-up again, but the top one might be seeing Sandler enjoy himself so much. His goofy energy and his extensive platter of skills as a performer have been a huge part of his charm ever since he first caught the stand-up bug as a teenager in Boston before getting his big break as a cast member on Saturday Night Live in the 1990s.

In the three years since he made his return to the stage, Sandler’s made the most of new opportunities to get silly, usually with a guitar in his hands. Now with more fans getting the chance to see the moonlighting movie star on his new 100% Fresher tour — the follow-up to the shows that yielded his Netflix comedy special 100% Fresh — it’s a great time to pay tribute to a comedian who’s made us laugh hard at all kinds of things that could use a little brightening up. Here are eleven things that Adam Sandler made at least a little bit funnier.

The foibles of fatherhood are very much on Sandler’s mind in recent sets, which have included killer bits on quietly trash-talking his nine-year-old daughter’s opponents while filming her basketball games and having an unexpectedly poignant encounter with another dad at Disneyland. Then there’s his all-too-acute depiction of a very particular kind of parental fatigue in a new song called “My Kid’s Only Got One Line in a Play.” (And yes, as every mom and dad knows, you do have to stay for the whole show.)

Cafeteria Food (And the Good People Who Serve It)

It’s tough to imagine anyone making something side-splittingly funny out of school-lunch food, and it’s basically impossible to imagine an SNL skit that could ever outdo the ridiculousness of Lunch Lady Land. It’s unlikely anyone has ordered a sloppy joe without calling it a “sloppy joe, sloppy sloppy joe” since this one first aired in 1993.

Keeping to the tradition he set in much-cherished SNL bits like Opera Man (a character he recently revisited while hosting his TV alma mater) and his albums of the 1990s, Sandler’s latest performances are a showcase for his musical mimicry skills. We love it most when he adopts a low, gravelly Boss-like tone and goes for a more serious pose — and then of course the lyrics of songs like “We Need a Hero” turn out to be as hilarious as everything else that comes out of his mouth.

Sandler is a gifted musician as well as a comedian, and it should come as no surprise that his guitar skills have improved with his years of man-cave practice time, but who could’ve guessed that he’d sharpen his MC skills, too? Not only is Sandler’s new jam “Phone Wallet Keys” a hilarious primer on all the things modern dudes can’t keep track of, but it boasts a killer beat, too. Gucci Mane, consider yourself served.

Making it clear that the more absurd the rhymes, the funnier the song, Sandler took on the centerpiece of every Thanksgiving meal, while just barely containing his own laughter. Just about everyone who was alive in 1992 still wishes turkey only cost a nickel.

Sandler’s wise to thank his wife Jacqueline — his better half for seventeen years — during his set, given how much he cracks wise about the tensions and frustrations that are part of any long-term relationship. Some spouses would probably be far less understanding about being the subject of so many raunchy jokes. But his sweetness seems absolutely sincere, which makes his take on married life easy to savor and relate to.

A new song that already seems as iconic as golden oldies like “The Chanukah Song” and “Lunchlady Land,” “Bar Mitzvah Boy” manages to include just about every detail that makes the Bar Mitzvah such a quintessential event of Jewish-American adolescence, from the botched attempts at speaking Hebrew to the pride over showing off “my first moustache hair.” To which we say: l’chaim!

Proving that he can extract humor from in the most obscure observations, and also that he’s not afraid to poke fun at people who could probably snap his body in two, Sandler takes on a side effect of a career spent being pummeled. Here’s hoping UFC fighters are thick-skinned.

It may sound strange to suggest any single performer could make the comedy scene a funnier place, but Sandler’s lighthearted performance approach may be especially appreciated by comedy fans feeling worn out by the heavier, more caustic forms of humor that reflect these anxious and divisive times. Some days, you just need a goofball.

Detroit, I’ll remember that one. Love you and thank you!

Though Sandler has cemented himself as one of Hollywood’s biggest stars thanks to his hugely popular movies (and we can’t forget his amazing dramatic turn in the indie hit Uncut Gems), he seems totally revitalized thanks to his renewed commitment to live performance. As a result, he’s rarely been funnier, which makes 100% Fresher one of the year’s most anticipated comedy tours.