10 Artists Who Always Perform in Costume 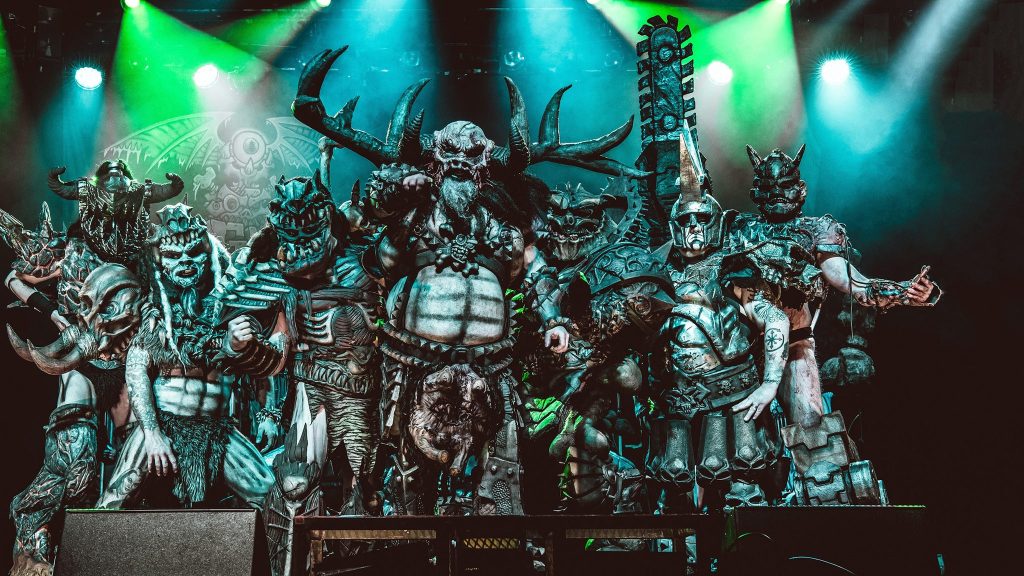 Plenty of us see Halloween as a once-a-year chance to throw on makeup and a clever costume and pretend we’re someone else. But the music universe is full of artists who take the idea of messing with their identity to a much more thrilling extreme. Below, we’ve rounded up 10 who view dressing up and transforming into an entirely different persona as a standard, year-round part of performing. It might be as simple as a mask or helmet, or as elaborate as a full face of makeup and a specially designed outfit. But it’s impossible to deny that these disguises only enhance the musical experience.

KISS set the blueprint for costumed rock by assuming sci-fi-meets-comic-book personas — The Starchild (Paul Stanley), The Demon (Gene Simmons), The Spaceman (originally Ace Frehley, now Tommy Thayer) and The Catman (originally Peter Criss, now Eric Singer) — with unique face makeup and futuristic, silver-tinged outfits. In concert, the hard rockers embody the personalities of their characters, with blood-spitting, tongue-waggling Simmons especially playing up the evil side of his alter-ego. It’s safe to say masked rockers Slipknot and Mushroomhead wouldn’t feel as free to let their freak flags fly had KISS not paved the way.

Come one, come all! To the Nightmare Castle ☠️ thank you Manchester. Photo @thefreelenser #OlBlackEyesIsBack

Alice Cooper is both a band and a person — specifically, the man born Vincent Furnier, who has embraced and embellished his sinister persona with gusto since the late ’60s. Musically, his brand of macabre, horror-tinged hard rock and metal concerts has been massively influential on dozens of acts, while his B-movie stage antics — which, over the years, have included a guillotine beheading, electric chair frying and snakes — are perma-spooky. If you dig King Diamond or Ghost, thank Alice Cooper first.

For the last 35 years, GWAR have forged their own brand of heavy metal shows rooted in a well-developed backstory: The band members are outer-space warriors who were excommunicated from their fighting force, the Scumdogs of the Universe, and created humanity after being sent to Earth. Today, these destructive soldiers portray bawdy characters and do battle (read: play shows) in over-the-top costumes. Just don’t stand too close to the stage at a GWAR concert if you’re feeling protective about your outfit — fake blood splatter (among other gross substances) is a given at their gigs.

New Zealand! Get ready for the Nostalgic For The Present Tour TONIGHT at Mount Smart Stadium 💕 tickets are still available on siamusic.net/tour – Team Sia

Pop star Sia isn’t afraid to show her face here and there, but for many years, her signature look was a face-obscuring, two-toned wig that was often topped with gigantic bow. The accessory made Sia a fashion icon — and also gave her the reputation as a savvy commenter on the intersection of fame and beauty.

Here’s what it feels like to be an undead funkateer at your #soldout @delmarhallstl show. Thanks #stlouis #STL! We did IT. #original #undead #funk #yeah #delmarhall #livemusic #bestliveact #bestliveshow #worldfamousformodesty

As their name implies, this group — the self-proclaimed “World’s Preeminent Undead Funk Ambassadors” — perform while dressed head-to-toe as mummies, keeping their actual identities completely secret since they emerged in 2000. The conceit might seem silly or shticky, but there’s nothing at all funny about the group’s ace live show and musical chemistry.

Electronic music is a magnet for disguises, what with the cartoonish headgear worn by Marshmello or SBTRKT’s take on ceremonial masks. It’s safe to say that EDM superstar deadmau5 — a.k.a. Joel Zimmerman — has the most renowned silhouette, however: After all, it’s impossible to miss his gigantic mouse ears.

Even before deadmau5 strapped on his ears, Daft Punk — the French duo of Guy-Manuel de Homem-Christo and Thomas Bangalter — were crafting sweet electro-funk while sporting futuristic helmets. Their robotically slick attire seems of a piece with their hard-edged digital beats.

Swedish brother-sister duo The Knife, comprised of Karin and Olof Dreijer, are known for their influential electronic and synth-pop sounds — and for wearing face-obscuring Venetian masks, which only enhance their enigmatic vibe.

The mysterious country crooner Orville Peck materialized in Canada in 2019, obscuring his face with an eye mask and long fringe in a variety of colors that shields him from the eyes down. When coupled with an ever-present cowboy hat and Western wear, he looks like a very debonair marauder.

Better than some funky socks… #StanceAnthem

Hip-hop pioneer MF DOOM (that’s all caps, he stresses) took inspiration from the comic adversary Doctor Doom when he first started sporting a mask back in the ’90s. (An early iteration of the costume, incredibly enough, adapted the face plate from an actual helmet used in the movie Gladiator.) Over time, DOOM — born Daniel Dumile — has honed the look of the mask with some detailing and colors, although the sleek, warrior-like essence of the covering remains intact.