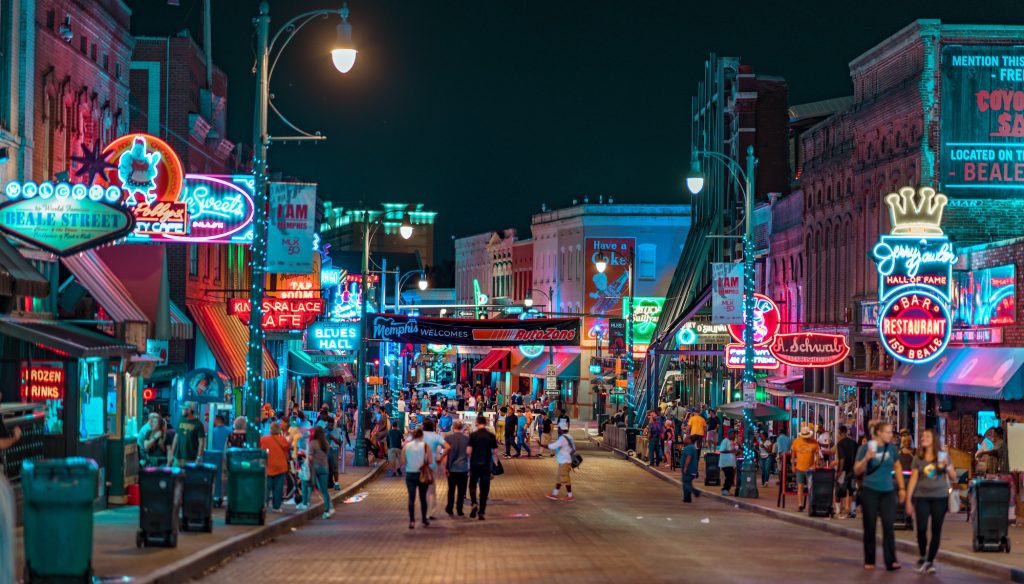 It’s known as the birthplace of rock ‘n’ roll, and as the home of blues and soul. With no shortage of music and entertainment, this Tennessee city offers a stellar mix of historic venues and modern facilities. Whether you’re looking for an indoor show or outdoor concert, or even a PGA Tour golf tournament, here are some of the best places to spend your days and nights in downtown Memphis and beyond.

An officially recognized historic building, the Orpheum Theatre preserves the opulence of its 1928 beginnings. On the corner of South Main and Beale in downtown Memphis, this 2,300-seat theater is the city’s definitive home for Broadway productions like Rent, Phantom of the Opera and The Lion King. Also known as a world-class concert hall, the Orpheum in its early days hosted legends Duke Ellington and Louis Armstrong, and more recently The Beach Boys, Lauren Daigle and Willie Nelson. The venue has undergone multiple revitalization projects to update its classic interior architecture as well as its nine-decade-old Wurlitzer organ. And in 2015, the adjacent Halloran Centre for Performing Arts & Education was opened, ensuring that the Orpheum’s story will be passed on for generations to come.

With a stage set amid 96 gorgeous acres of the Memphis Botanic Garden, Live at the Garden is the premier outdoor music experience in the city. The yearly concert series features five shows from June to September with capacity for 2,500 people seated at linen-lined tables and another 4,500 on the lawn where you can bring your own chairs and blankets. Memphis legend Isaac Hayes kicked off the inaugural show in 2001, and since, acts like Diana Ross, Lionel Richie and Robert Plant have graced the Garden Stage, as well as a slew of country acts in the annual Wolf at the Garden show. Situated within Audubon Park in East Memphis, the venue offers plenty of free on-site parking, and concertgoers can enjoy a warm Memphis evening with a picnic, food truck fare or a pre-ordered meal from on-site catering.

Cannon Center for the Performing Arts

Located a stone’s throw from Wolf River Harbor and the iconic Hernando de Soto Bridge in downtown Memphis, the Cannon Center for the Performing Arts is home to the Memphis Symphony Orchestra, plus theatrical shows and performances of rock, hip-hop and soul music. The 2,100-capacity concert hall opened in 2003 and has hosted diverse acts (Jill Scott, Lyle Lovett, Bonnie Raitt). The modern building offers classic three-tier seating, and being that it sits along the Main Street Trolley line, the Cannon Center is a perfect part of any quintessential downtown experience.

Happy #EarthDay 🌎 TPC Southwind was one of the first golf courses in the state of Tennessee to be certified as an Audubon Cooperative Sanctuary System by Audubon International. The TPC Network has an unwavering commitment to environmental excellence and sustainability. Learn more about our environmental initiatives. https://bit.ly/2V9pBuo

Every July for over 30 years, the TPC Southwind private golf club becomes home to the PGA Tour’s WGC FedEx St. Jude Invitational. Just a half hour southeast of downtown Memphis, the club’s sprawling 18-hole course is ranked as one of the 10 most difficult courses on the professional tour and is among the most beautiful. With a gaudy $7 million prize at stake, the five-day affair features PGA stars like multiple FedEx St. Jude Invitational champion Dustin Johnson and tour favorites like Phil Mickelson and Ben Crane. While Grounds Access tickets are an affordable way to take in the tournament, the Ultra Club ticket experience allows for an up-close seat in an air-conditioned viewing area along the 11th hole’s challenging island green.

A HUGE thank you to all of our incredible sponsors as the next #facesofthelevittshell! These organizations and individuals make it possible for us to bring amazing artists to perform for the benefit of the entire community. Learn more about joining this powerful group at levittshell.org/become-a-sponsor #supportfreemusic #levittshell

A timeless band shell built in 1936 as part of Roosevelt’s New Deal, Levitt Shell at Overton Park famously hosted Elvis Presley opening for Slim Whitman in 1954, for what many historians consider to be the first ever rock ‘n’ roll show. Today, midtown’s Levitt Shell is able to put on 50 free concerts a year through the fundraising efforts of the annual marquee Shell Yeah! concert. Eclectic acts like Sharon Jones & The Dap-Kings, Wilco, and Jason Isbell & the 400 Unit play in front of the stunning, concave, multilayered shell that has top-notch audiovisual capabilities. Parking is free, and both the 50 Poplar and 53 Summer bus lines stop at Overton Park, so bring your own chairs and blankets, pop over to the Shell Eats food truck area and get comfortable on the marvelous lawn.