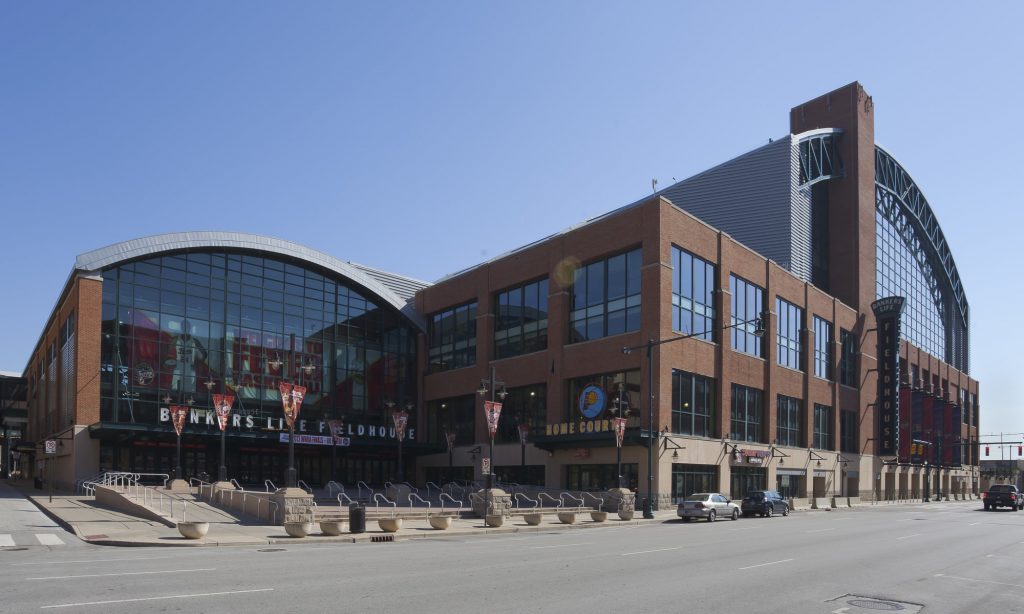 Bankers Life Fieldhouse keeps the heart of downtown Indianapolis pumping, especially on the nights its home basketball teams — the NBA’s Indiana Pacers and the WNBA’s World Champion Indiana Fever — prove victorious. Since the turn of the century, the indoor arena has served as Indiana’s most treasured multifunctional space, hosting some of the world’s toughest athletes, most talented musicians and cutest Disney characters. While it may have the retro look and feel of a humble high school field house from the outside, it comes packed with plenty of ultramodern architectural details on the inside, making it one of the Midwest’s top sports and entertainment venues.

The Fieldhouse is #Ready4Action. Thanks to everyone who signed the banner to welcome back @vicoladipo.

A post shared by Bankers Life Fieldhouse (@bankerslifefieldhouse) on Jan 29, 2020 at 2:51pm PST

When it first opened its doors on November 6, 1999, the arena was called Conseco Fieldhouse, named after the Indiana-based financial services group. Its design was meant to evoke the great history of Indiana high school basketball and keep the traditions of Hoosier Hysteria alive. In fact, in its first season, the Fieldhouse proved to be something of a lucky gem for the Pacers, who ended up making their first NBA Finals. In June 2000, led by coach Larry Bird, the team hosted the Los Angeles Lakers for games 3, 4 and 5, but ended up losing the series in a tight race. That same year, the Indiana Fever made their debut, bringing the WNBA to the Fieldhouse as well.

The arena was also built to accommodate an NHL-sized ice rink, and became the home of the Central Hockey League team the Indianapolis Ice from 2000-’04. In 2004, it was set up to host a world swimming competition. In subsequent years, it’s been used as a venue for just about every type of sport imaginable — even auto racing.

By 2011, the arena changed its name to Bankers Life Fieldhouse, and the next year a state-of-the-art sound system and scoreboard were installed to include multiple HD video screens that allow for excellent views from every corner of the arena. This came just in time for the 2012 WNBA Finals, when the Fever won their first world title. In the years to follow, the Fieldhouse has hosted other nail-biting athletic competitions, like the 2015 P&G Gymnastics Championships, in which the soon-to-be Olympic champion Simone Biles took home the gold medal.

In the spring of 2019, renovations on the Fieldhouse were approved to include a new outdoor public plaza for concerts, games and an ice-skating rink. The scope of the project included several improvements made inside the arena as well, including extra gathering spaces, observation decks and enhanced suite areas. Best of all, the deal came with a guarantee that the Pacers would remain in Indianapolis for at least 25 more years. The first phase of the renovation was scheduled to be finalized in time for the 2021 NBA All-Star Game. The work was scheduled to avoid interfering with the Pacers’ seasons, but the Fever’s 2020, 2021 and 2022 seasons were relocated to to Butler University’s Hinkle Fieldhouse.

We loved having our @pacers fans back in the house and are so ready for another incredible season at The Fieldhouse 💛💙 October 23 can’t come soon enough!

A post shared by Bankers Life Fieldhouse (@bankerslifefieldhouse) on Oct 13, 2019 at 2:47pm PDT

Bankers Life Fieldhouse is one of the country’s premier basketball arenas. Along with being the home of the Pacers and Fever, it has also hosted several NCAA events, including the Women’s Final Four and Big Ten Conference championships, not to mention a number of youth basketball games and high school tournaments. Still, while the Fieldhouse sees plenty of on-court action, it was never meant to be solely a center for basketball.

When pro and amateur players aren’t tearing up the court, top music acts like Elton John, Metallica and Billie Eilish are rattling the rafters for crowds of up to 19,000. Any major act to roll through Indiana will likely be making an appearance here. In between, the Fieldhouse has seen a number of athletes and entertainers pass through its doors, from Olympic hopefuls and world-renowned Cirque du Soleil artists to WWE superstars and Disney on Ice princesses. The venue keeps a jam-packed schedule of sporting events, circuses, rodeos, kids’ shows, wrestling showcases, charity fundraisers, conventions, graduations and more — all year round.

All that cheering, singing and dancing would leave anyone famished. Fortunately, the Bankers Life Fieldhouse offers an abundance of local foodie favorites and culinary comforts. Try out some of Indianapolis’ very own tasty creations, including Mimi Blues’ melt-in-your-mouth braised brisket sliders, Bru Burgers’ loaded meat-lover meals and The Garden Table’s sensible veggie and Mediterranean bowls. While you’re at it, slip into Sun King Brewery, Craft House & Bar or Indiana Ale House & Bar for a local craft beer, wine or cocktail. And don’t forget to save room for one of Jack’s Donuts’ sinful build-your-own doughy treats.